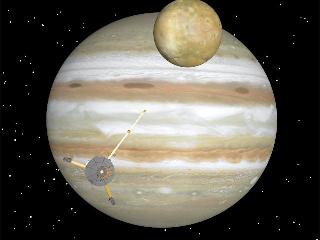 Overhead View of Jupiter (UTC). The green line is the Galileo orbiter's trajectory. The orbits of the four Galilean satellites are shown (from the center, Io, Europa, Ganymede and Callisto). The direction towards the Sun and the Earth is towards the top of the image.

The Galileo spacecraft arrived at Jupiter on December 7, 1995, and fired its main engine for 49 minutes for a successful orbit capture around Jupiter. On the same day, Galileo's atmospheric probe plunged into Jupiter's atmosphere, and relayed information on the structure and composition of the solar system's largest planet.


Everything you've wanted to know about Galileo's arrival at Jupiter.
A new documentary on Jupiter. An excellent preview for Galileo's Jupiter arrival.
This interesting article appeared in the December 1995 issue of the Planetary Report.
Technical paper presented at the last International Astronautical Federation meeting in 1994.
An article from the September 1995 issue of the Galileo Messenger.

Images of the Probe Entry Site

Having trouble running animations? Look here for information on how to setup your browser for animations.